Guest Blog: Inequality in the UK

The continued rise of social inequality in the UK

In this SustMeme Guest Post, Scarlett Potter assesses the state of social inequality in the UK today and explores the prospects for improvement in an uncertain future. 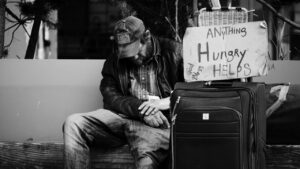 SP: Social inequality is running rampant in the UK. As if that wasn’t bad enough,  the situation only continues to get worse, as leaders prioritise Brexit and other political events above all other concerns. Dubbed the 5th most unequal country in all of Europe, the Kingdom is therefore anything but United — not only is its its financial health divided over income, but also geography, gender, ethnicity, and age.

A look at social inequality

The Institute for Public Policy Research (IPPR) has found that more than a fifth of the country’s population survives on income below the poverty line after housing costs, while nearly one in three children currently live in poverty. The use of food banks is also rising. Not to mention, there is a six-fold difference between the income of the top 20% of households and those in the bottom 20%. Wealth inequality in general is much worse, as a whopping 44% of the UK’s wealth is owned by 10% of the population — five times the total wealth held by the poorest half.

Equality in job industries is also suffering. For instance, Sustainable Futurist Jim McClelland points out that the construction industry has long lacked women recruits, along with having a below-average proportion of Black, Asian, and Minority Ethnic (BAME) workers. Additionally, the current tax and welfare reforms aren’t doing much to help those who are already worse off. In fact, on average, women lost £400 per year compared to a £30 average loss experienced by men. Not to mention, black and ethnic minority households, families with one or more disabled members, and lone parents (who are overwhelmingly women) are also amongst those who have suffered disproportionately from these changes.

As a result, those in deprived neighbourhoods live seven years less compared to people in wealthier neighbourhoods. Social mobility is also restricted, as the lack of opportunity results in people not being able to reach their full potential. These neighbourhoods also suffer from higher crime rates, where continued exposure can also impede social mobility. Additionally, inequality only continues to grow given the weak wage growth and rising living costs that put a damper on the new generation. In fact, Millennials in particular are four times more likely to rent than buy a house, given the soaring housing prices.

How the UK addresses inequality

Having said all that, steps have been taken to address inequality. Since the 2008 global crisis, for instance,The Guardian reports that the UK government has raised the minimum wage to £7.83 per hour from £6.19 in 2013 for workers over the age of 25. It has also cut taxes and raised the level of income at which people should begin paying tax. Unfortunately, a fifth of all employees remain on low pay, the majority of whom are women. These measures have also served to make other factors of compensation worse, as raised minimum wages have led to cuts in benefits for those in and out of work.

In an effort to stimulate the creation of jobs after the global market crash, the Bank of England dropped interest rates close to zero. They also pumped billions into the economy through quantitative easing, where the funds were acquired from bonds in financial institutions. Cheaper borrowing helped people pay their mortgages and helped companies keep people at work.

How the UK’s political situation is affecting inequality

Despite these measures, the political landscape in the UK isn’t looking so great right now — and there are a lot of events on the horizon that could make the situation with inequality even worse. FXCM’s fiscal economic calendar provides an overview of political events poised to affect not just the financial market, but the overall economy as well. Currently, the most major political event surrounding the UK is Brexit — a 3-year exit in the making. Leaving the safety of the European Union’s regulatory framework affects a lot of things for workers’ rights. For instance, the UK will no longer be bound to follow the Working Time Directive, which limits the number of hours an individual can work in a week. It will also affect the requirements to make sure that workers doing the same jobs will be paid equally. While this doesn’t necessarily mean that the UK will no longer follow these regulations in a similar fashion post-Brexit, the exit causes a lot of fear that the government could lower the standards on workers’ rights. Additionally, freedom of movement for UK citizens could very well be restricted, and with no official details on the deal to soften the blow, this could also limit the job opportunities available to Britons.

The future is fraught with uncertainty and in the wake of Prime Minister Boris Johnson securing a last-minute deal with the EU, there’s no telling how Brexit could further affect the UK’s inequality. We can only hope that the rate of inequality will slow down in the near future.

Scarlett Potter is a content specialist with online branding, and media planning.

You can check out the full archive of past Guest Blog posts here.